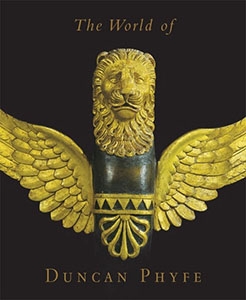 Duncan Phyfe (1768–1854), whose name is known to even those with the most casual interest in American decorative arts, holds a prominent place in a list of those who have made significant contributions to the arts of the United States. During the course of a career of more than four decades in America, Phyfe’s shop produced extraordinary pieces of furniture for some of the wealthiest and most prominent figures of their time, in New York and beyond. The World of Duncan Phyfe includes not only a selection of works by Phyfe from each of his various periods, but also representative pieces by competing cabinetmakers in New York, among them Charles-Honoré Lannuier, Michael Allison, Thomas Constantine, and J. and J. W. Meeks, as well as other pieces that have hitherto defied specific attribution. Also featured is a variety of other decorative arts dating from the Phyfe era, including examples of silver, porcelain, metalwork, and lighting made in New York, or in many cases produced abroad for an American clientele, together with a group of New York-centric paintings, works on paper, and sculpture. The result is a multi-media exhibition of over 100 pieces that illustrate the strength and breadth of the artistry and craftsmanship in New York during the first half of the 19th century. In this impressive exhibition catalogue, each work is accompanied by individual essays and color illustrations.

The catalogue is soft cover, 152 pages, fully illustrated in color.