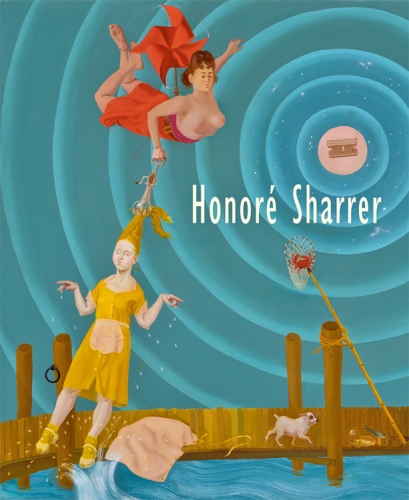 Dismissed at various times in her career as a “leftist,” a “housewife,” a “realist,” Sharrer is enjoying a reconsideration by artists, collectors, and curators alike. Linda Nochlin championed her in the final years of Sharrer’s lifetime. Since then, the Museum of Modern Art, New York; The Metropolitan Museum of Art, New York; the Seattle Art Museum, Washington; the Smithsonian American Art Museum, Washington, D.C.; and others have delved into their basements to add examples of her work to their main galleries or themed exhibitions. Today’s fascination with underrecognized women artists, content-driven figuration (Lincoln Kirstein was a friend and supporter), and Surrealist undercurrents have led to an upwelling of affection for this artist.

The first large-scale institutional retrospective devoted to Honoré Sharrer was staged in 2017 at the Columbus Museum of Art, Ohio, the Pennsylvania Academy of the Fine Arts, Philadelphia, and the Smith College Museum of Art, Northampton, Massachusetts. Hirschl & Adler is pleased to continue that momentum with a comprehensive exhibition of its own, bringing a body of her work to a New York audience for the first time in seventeen years. With forty paintings and works on paper from the 1970s through the 1990s, the exhibition will present the artist in her mature decades, at the height of her potency as a woman painter calling out the hypocrisy and conformity of patriarchal America. The accompanying catalogue will feature an original essay by contemporary artist Natalie Frank who compares Sharrer’s empowered point of view with her own uncompromising take on women’s agency in the 21st century. In so doing, Frank places Sharrer at the forefront of one of the most vital currents in contemporary art and culture.

Famously describing her work as “vicious, tender, and meticulous,” Sharrer combined the precision of a Northern Renaissance artist with jarring Surrealist imagery and the biting critique of Goya, Daumier, and George Grosz, all to re-define “realism” as a valid “modern” idiom in the Cold-War era.

In 1949, Mademoiselle Magazine named Honoré Sharrer (1920–2009) “Woman Artist of the Year.” In 1951, she had a solo exhibition at New York’s prestigious Knoedler Gallery, where her five-panel work, Tribute to the American Working People (1946–51; Smithsonian American Art Museum, Washington, D.C.) attracted favorable critical praise and press notice. Indeed, the first baker’s dozen years of Sharrer’s career promised a successful, high profile future. Consistent with her auspicious beginning, Sharrer worked as an artist for the rest of her life, producing a body of accomplished and impressive paintings. But the acclaim faded, done in by a combination of Senator Joseph McCarthy’s wave of repression, by Sharrer’s adherence to figural art in the face of the dominance of abstract expressionism in the 1950s and 1960s, and, of course, by the fact that the artist was a woman. Her budding resurgence is similarly the result of social forces that are now encouraging the reexamination of a neglected body of work and of major talents unfairly ignored.

The catalogue is soft cover, 16 pages, fully illustrated in color.