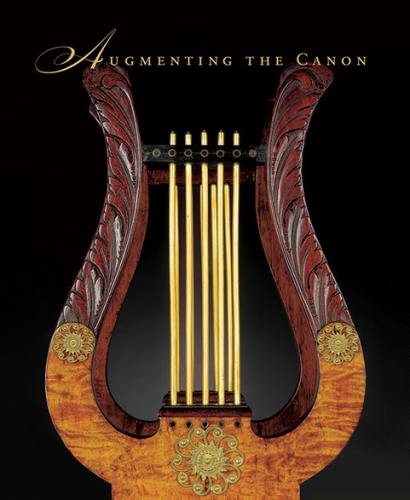 Augmenting the Canon includes about sixty masterpieces of Neo-Classical furniture, embroidery, silver, lighting, ceramics, and glass made in America, or in England, France, or China expressly for an American clientele between the first years of the nineteenth century and the early 1840s. Included will be many works that have never previously been exhibited or published in a scholarly context.

Illustrating the strength and breadth of American artistry and workmanship during the early years of the Republic, and the collecting habits of the patrons who bought or commissioned the works at the time they were made, this exhibition and accompanying catalogue is an in-depth visual study of the indigenously American Neo-Classicism that Hirschl & Adler Galleries has previously explored through exhibitions and publications over the last twenty-seven years. The artworks included in Augmenting the Canon are shown and discussed within the framework of an area of expertise and appreciation that has grown exponentially over the past twenty years, and has recently been the focus of meaningful scholarship disseminated through museum exhibitions, books, articles, and symposia.

Augmenting the Canon brings forth many new and exciting discoveries—and some rediscoveries—at the highest level of production in the various decorative arts media that were being produced in Federal and Neo-Classical America. This exhibition adds significant examples to the known “canon” of those already published and exhibited, and broadens the depth of our knowledge of a field that is still emerging as an important collectible.

The catalogue is soft cover, 104 pages, fully illustrated in color.