Having spent an entire career painting New York City, Frederick Brosen is intimately aware of a city’s romance. The drama of his hometown’s skyline and the allure of its back alleys have long been celebrated in Brosen’s masterful watercolors. In his fifth solo exhibition with Hirschl & Adler Modern, Brosen turns his attention, and his affections, to Rome and Florence. In 14 new paintings, ranging in size from 8 inches square to 30 x 50 inches, Brosen explores the harmony of color and light and the beautiful proportions of form that have captured the imagination of artists for centuries.

An ardent student of the grand tradition of landscape painting, Brosen has, indeed, found that all roads lead to Rome. The artist writes: “As a landscape and architectural painter, it was not a matter of why but simply a matter of when this venerable and poetic tradition would be a logical subject to interpret personally. The great challenge of course, is that tradition itself. One can never outdo those past Masters even though they teach us, through their own interpretations, a profound variety of formal analysis and poetic responses. One must find his or her own formal language and emotive connection in the work, to attempt to find one’s own voice in this resounding visual chorus.”

Brosen’s own connection began with simply walking the streets of Rome and Florence, allowing his own sense of visual engagement and fascination to be his guide. From on-site sketches and photographs he develops a fully-rendered graphite drawing over which he lays many layers of watercolor. This process simultaneously allows the viewer to experience of the subtly of the medium while basking in the rich color that Brosen achieves in each painting. The final effect is magnificent and Brosen is a true master.

Examining how Ancient Rome majestically coexists within a vibrant modern metropolis, Frederick Brosen’s thoughts naturally turned to his first love: “Another important motivation for my choosing this subject now is the keenly felt sense of loss I feel regarding my primary subject, New York City. Ubiquitous luxury developments are replacing the older neighborhoods with towering glass and steel boxes, profit is all too often cloaked as progress. There is no romance in these places. I long to engage with a place that retains its dialogue with the multiple layers of experience, the past and the present. Where better to find this narrative than Rome?”

Frederick Brosen (b. 1954) studied at City College of New York and the Art Students League before earning his M.F.A. from Pratt Institute. He has been twice awarded a Pollock-Krasner Foundation Grant as well as the Silver Medal of Honor by the Royal Society of Arts & Letters in London. As one of America’s finest watercolor artists, his works are found in numerous private and public collections including the Metropolitan Museum of Art, the Museum of the City of New

York, the New York Historical Society, The National Academy of Design, the Knoxville Museum of Art, Tennessee, and the Frye Art Museum in Seattle. In 2010, Brosen was awarded the Lifetime Career Achievement Award from the City College of New York. His work is included in the current, touring museum exhibition Coney Island: Visions of an American Dreamland, 1861-2008, which travels to the Wadsworth Atheneum, the San Diego Museum of Art, the Brooklyn Museum and the Chrysler Museum of Art. Brosen lives and works in New York City.

Frederick Brosen Recent Watercolors: Rome & Florence opens on Thursday, February 4 and runs through Saturday, March 12, 2016.  Located in the landmark Crown Building at the world-famous corner of 57th Street and Fifth Avenue, Hirschl & Adler Modern is open Tuesday through Saturday, from 9:30 am to 5:15 pm. 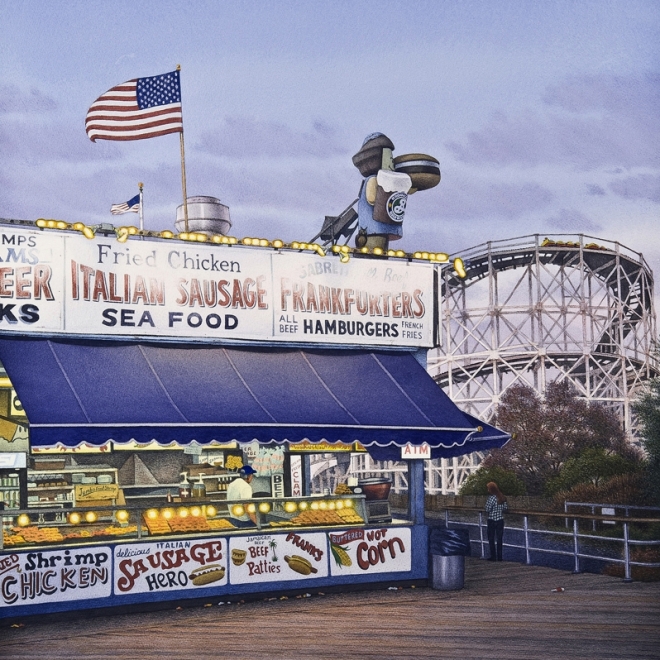 Frederick Brosen
Back To Top